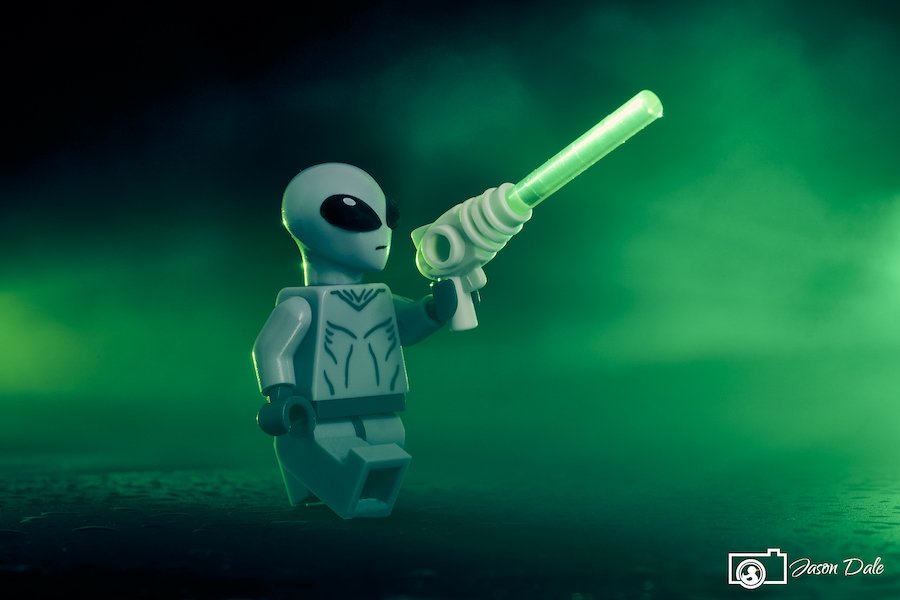 The Stuck In Plastic Weekly Lego Challenges are great fun but occasionally the themes don’t always appeal or require a little bit more thought. One of the last themes for January was ‘Science Fiction’ which whilst encompassing a wide range of possible subjects (e.g. Star Wars, Doctor Who, Aliens etc) instantly filled me with dread. But challenges do, apparently, make us stronger so I gave it a try.

When I’m stuck for ideas or need some inspiration I usually turn to Google and scroll through photos on the theme. One image jumped out from the crowd and it involved an alien being beamed down to a planet. The figure was small and in silhouette with a huge arc of light dominating the scene. Could I replicate that in Lego? The Alien Minifigure from Series 6 was chosen as the subject and with a bit of a play I managed to get something that looked similar. Except it didn’t look brilliant and lacked the mood I wanted.

So from there I started to play around with creating something else but still involving the Series 6 Alien Minifigure. The figure holds a ray gun with a transparent green ‘ray’ eminating from it – very much like the piece that is used for lightsabers. I wanted to highlight that with lighting and used a green finger light to get that effect. A second green light was used to the left of the figure to give a bit of depth. However to create mood a Nano Atomiser was used. The Atomiser is the best thing I’ve purchased for Lego Photography. It fires a fine spray which if used well gives a smoke like effect.

To be fair you never quite know how the atomizer effect will work with respect to your lights but in this case I think it looks like spoke from an explosion. Eagle eyed viewers will note that the figure is walking on a very wet floor. This was because after several shots the perspex surface became incredibly wet from using the Atomiser. Initially I did think about wiping it dry but wet look gives – at least in my view – a better surface. This is one of the cool things with Lego Photography. From being stuck on a theme to coming up with a basic plan and a few happy accidents you can end up with a pretty cool shot.

What I do like about this shot, titled ‘We Come In Peace, Shoot To Kill’ is that is does have a classic B movie feel to it. That’s in part down to the choice of figure but also post processing with Capture One. Overall I’m pretty happy with the overall shot. Let me know what you think.