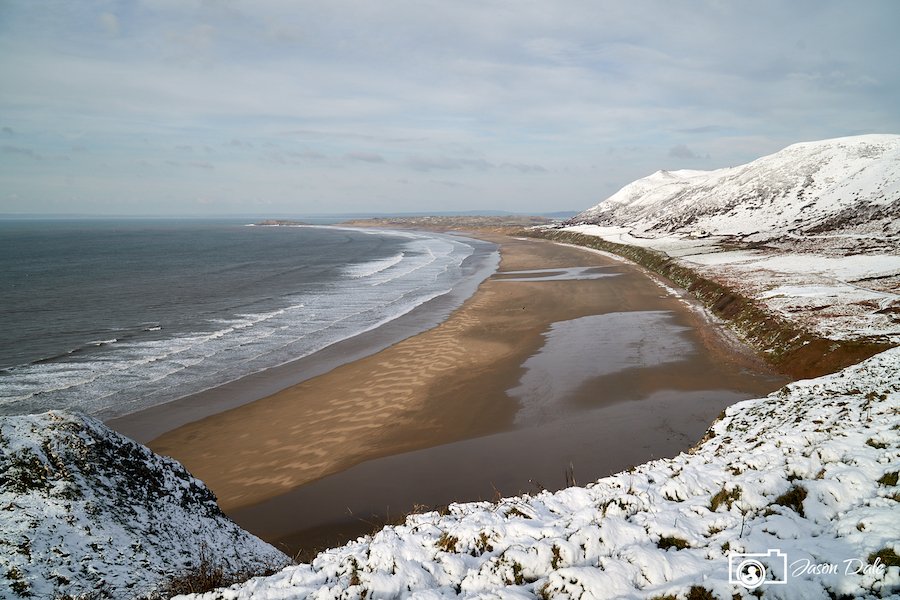 Snow finally hit South Wales on the 1st February and it’s law that you must go out with a camera. Now I’m not hardcore like those who camped out on Pen-y-Fan or who trudge miles through the snow. Instead it’s a nice warm car and head out onto Gower. Our first stop was Cefn Bryn where there was plenty of snow, a few ponies and a biting North Wind. That stop produced a few nice shots but it wasn’t fun hanging around waiting too long.

We then decided to try Rhossili on the off chance that they’d be a nice snow scene to photograph. Surprisingly the roads were clear, although there weren’t many visitors to the area. The National Trust shop was closed as was the cafe, but the hotel was thankfully open! I took a few shots looking down over Llangennith Beach. The sheep with their colourful markings would have been ideal subjects to contrast the snow but they weren’t keen on being models. This meant I had some that shots were OK but they looked as grey and cold as the day itself.

With that we headed off to the hotel for hot food and drink. By the time the last chip was eaten the light had changed considerably. The beach and cliffs were brighter and so it was back out in the cold to take a few more shots. The result is the shot above. There’s hardly a soul to be seen but the beach still looks inviting. The shot is also pretty straight out of camera – other than a few minor edits for dust etc. Camera details are Sony A6500 with 18-105mm F4 G lens at 18mm, 100ISO, 1/100s at f13.

Although I love the A6500 it’s a fiddly little thing with a life of it’s own. At one point during the day the ISO was at 200,000 and I’ve no idea how it had jumped that high! The dials and buttons are very sensitive and you do need to be mindful of this when shooting. I much prefer my A9 or the A77ii where the dials are a lot less sensitive.

I posted the image on social media and have been surprised by the reaction. A post on Welsh Landscape & Seascape Photographers notched up over 500 likes. My instagram post faired reasonably well but on Twitter it had no impact whatsoever.

The image is available to purchase – feel free to contact me for details.