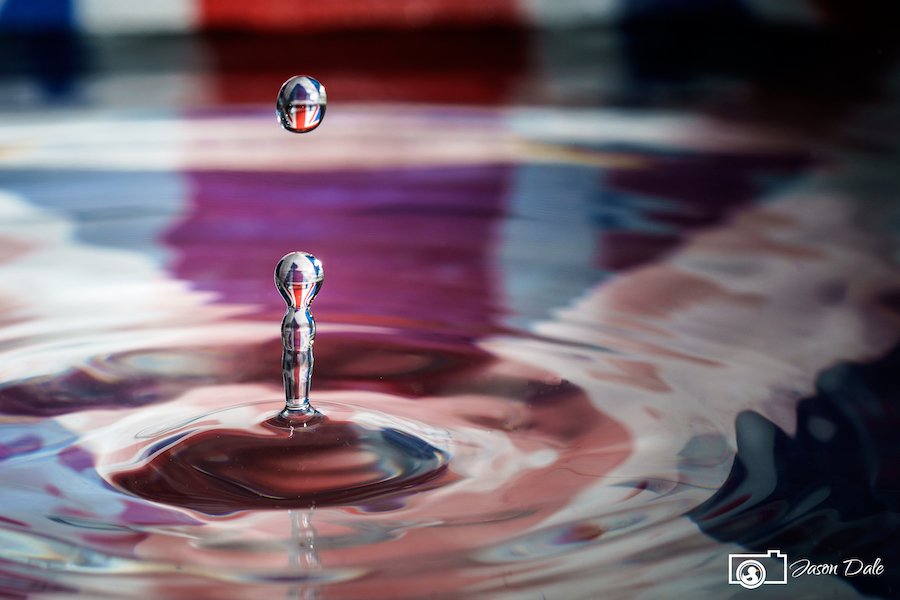 The subject for a recent internal camera club competition was macro. This gave me an opportunity to have a play with water droplet photography. I’d given it a go a year or two back but with limited success. Ideally I’d have a used a sophisticated dropping system but instead “made do” with a plastic bottle, a lot of swearing and multiple shots.

Once I’d got the technique sorted off just using water – which was fun but gave unexciting images – I quickly progressed to playing around with coloured backgrounds to enhance things. In short a colour underneath the drop tray and behind it will result in defraction making a more pleasing image as it gives the water and droplet interest. It also saves colouring the water with food dye!!

After several hours of playing with various colours the best results I achieved were by using The US flag and Union Jack and that’s when an idea occurred to me – how would a water droplet image look with a Union Jack and Scottish Flag. The water drop images I was producing were showing separation – a timely subject considering the referendum. So my take on the Scottish Referendum using water droplet photography can be seen above.

The Scottish flag is the bottom image, under the tray of water, whilst The Union Jack was in the background. When the water droplets are shot you can clearly see the two flags. The only frustration with the final image is that the Scottish flag has a purple hue rather than a nice blue. This may be because it was done on a printer whilst The Union Jack was an actual flag (picked up at an Olympics football game in 2012).

Since this shot I’ve picked up a new automated dropper system – so expect a few more droplet images on the site in the near future.