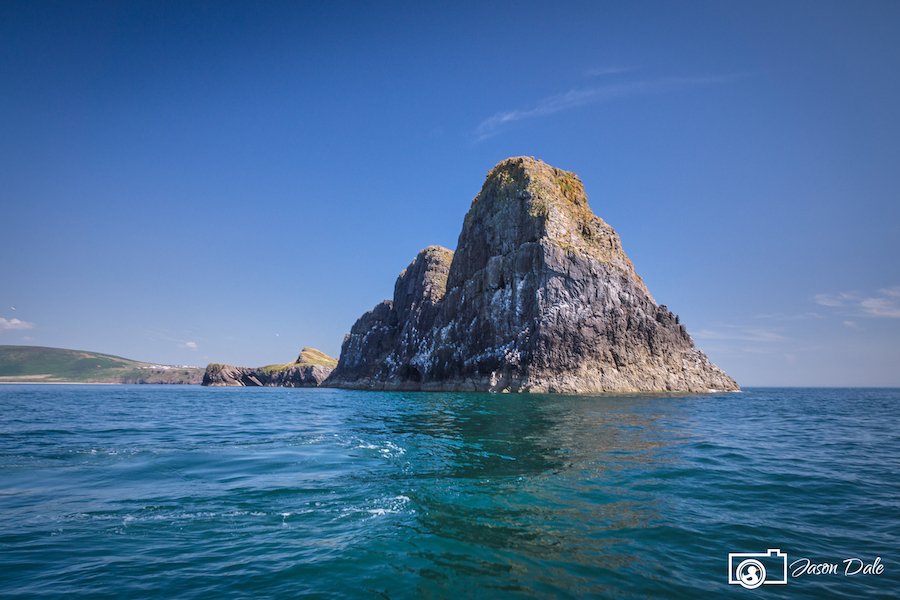 If you fancy cooling off during the current hot spell or just fancy seeing the fabulous Gower Coast from a different angle then do try and get on board with Gower Coast Adventures. Last Friday we headed off to Worms Head on the Sea Serpent to take in the views and hopefully spot some wildlife along the way.

I took my camera along to hopefully capture some nice shots of dolphins, which had been spotted on previous trips. Sadly there were no captures but we did see a couple of porpoises. Plus there were other wildlife along the trip. Starting at Port Eynon the Sea Serpent ventures along the coast taking in sights such as Culver Hole and The Red Lady Of Paviland.

A top tip for you if you’re going on this trip and want to take photos – sit on the right side of the boat. Whilst it was possible to get some shots from the left, I think it’d have been a lot easier from the right. Fortunately I was able to squeeze some nice shots out minus heads of other passengers!

On the way to Worms Head we spotted the porpoises – a fantastic sight. Almost impossible to photograph from a distance – and on a bouncy boat, so my advice is just enjoy the spectacle.. unless you’re lucky and you get a closer encounter. Going round Worms Head was the highlight of the trip as we got to see the iconic location from a different viewpoint and enjoy the wildlife that live around the area – including seals, kittiwakes and guillemots.

Photography wise the wildlife shots were taken with a 70-400mm lens whilst the landscapes were done with an 18-55mm and a polariser. I took two bodies with me as you don’t want to be trying to change lenses whilst at sea. We went on this trip on a calm day so there was minimal splashing but on a normal Welsh day I’d imagine it would be a little more choppier.

I really enjoyed the trip – Gower Coast Adventures were very attentive and informative during the trip so it’s highly recommended with or without a camera. I do think they could potentially run special photography trips if there was demand as there were occasions I’d have loved just a moment or two longer to try a few things.