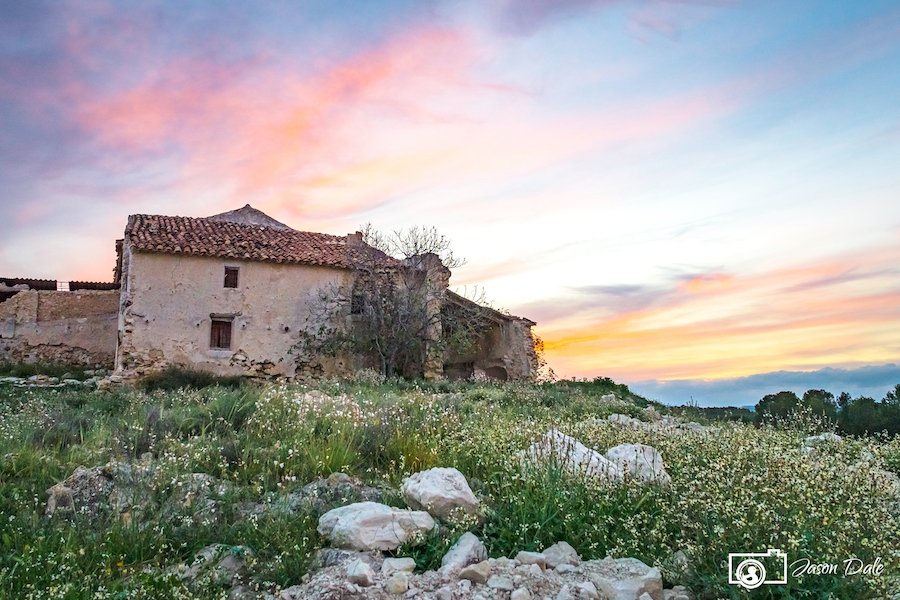 I’ve recently come back from a holiday in Spain so the next few blogs will probably be about shots taken during that time. Along with Jude, I spent a lovely week in a town called Calasparra, which is North of Murcia. It’s not your typical Spanish holiday destination as it’s not near the coast, but it’s a great place to relax. It can be hot especially in the summer months, but at times during last week it was actually hotter back home in Llanelli.

The unsettled weather meant there were clouds in the sky and it was a nice temperature to go exploring – perfect for photography. If you go in June/July/August it’s often far too hot to go out during the day! The varied weather this holiday also meant that the sunsets weren’t too bad either. Provided you caught them.

Near to the holiday apartment is an old ruined house, which in turn is a couple of minutes from the bar and it’s one of those things I’ve photographed a few times before (the ruins, not the bar). The first few days there wasn’t too much to get excited about sunset wise but on the Wednesday there were beautiful colours in the sky – guess who went out without the camera?

Surely the next day would be the same – of course not. The Thursday sunset was lifeless and it seemed that this would be a case of another one that got away. In fact the main thing I learnt this holiday was if you see something photograph when you see it (and remember to take your camera).

On a trip down to Lorca we spotted a field of unusual vertical solar panels which would have been great to photograph. However that idea was left for the way back but by the time we’d made the return journey the panels had actually changed position. What we didn’t realise was that as the because the panels were vertical they actually move with the sun. Any shot would have just been of the backs of the panels!

Anyway back to the ruin and thankfully the sunset and sky came up trumps on the final day of the holiday – just. This image is actually the last shot I took – f7.1, ISO200 and 1/60 second at 16mm. It’s not quite what I’d hoped for as I really wanted more colour in the sky from the sun, but the orange was fading fast.

I did try a couple of shots with the house more centrally positioned but you couldn’t see any orange. That didn’t work so well for me. I think the hint of orange on the right makes it a better shot and hope you like it.