I’ve never been to Cardiff Castle (at least not in it) and never been to a cheese festival, so The Great British Cheese Festival at Cardiff Castle on September 22nd was most certainly a two birds with one stone event. To be honest I had no idea what to expect, but did envisaged a quiet orderly cheese fanatic crowd in magnificent settings. In reality it was hectic!

The cheese tent was manic as cheese munching festival goers tried to pick up samples of all the various wares on offer. Trying to take photos in and amongst the fromage frenzy was a little tricky, but I did pick off some shots that I was pleased with. 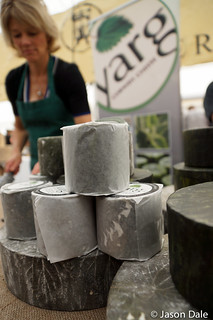 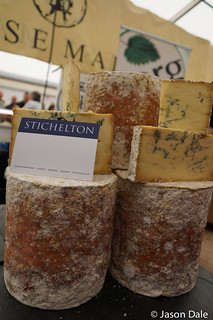 The aim for both the Yarg and Stichelton shots above was to have the cheese in focus in the foreground with the activity slightly blurred. The results aren’t too bad in my view. It’d have been nice to have had more time to take a number of different angles – and plenty more of the cheesemakers – but a man with a camera is easily swamped by free cheese hunters armed with cocktail sticks.

If you’re going next year then either try and get a pass for the press day or go first thing in the morning. In the afternoon the tent was so busy that people were queuing up to go in! The Great British produce tent also gets busy but by the afternoon their stocks do get low. The flagons of Gwatkin Cider (as seen below) were all gone when we returned later in the day. 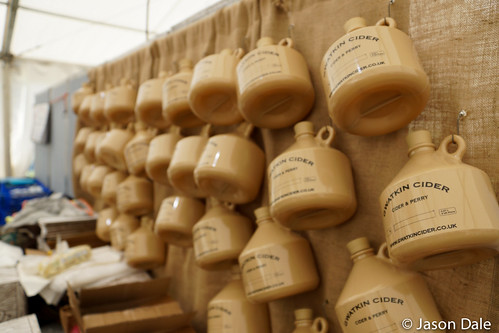 One thing that did surprise me was just how busy the place was – perhaps the weather was a factor? The Saturday of the event was glorious, whilst the Sunday was apparently a lot wetter. Anyway this shot, taken from The Castle Keep, gives a great view of the festival. 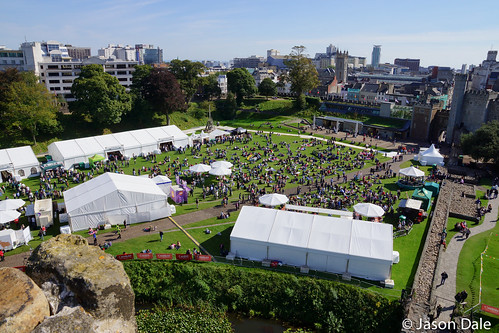 As well as the food, festival and castle there were numerous other photo opportunities. A cheese tossing event was on at the same time and there were Birds of Prey on display. Although I like photographing birds, seeing them tied to a post rather than capturing them flying wild wasn’t quite the same experience. The castle and grounds though are magnificent and there’s plenty to photograph – but it’s wiser to go on a less busier day!