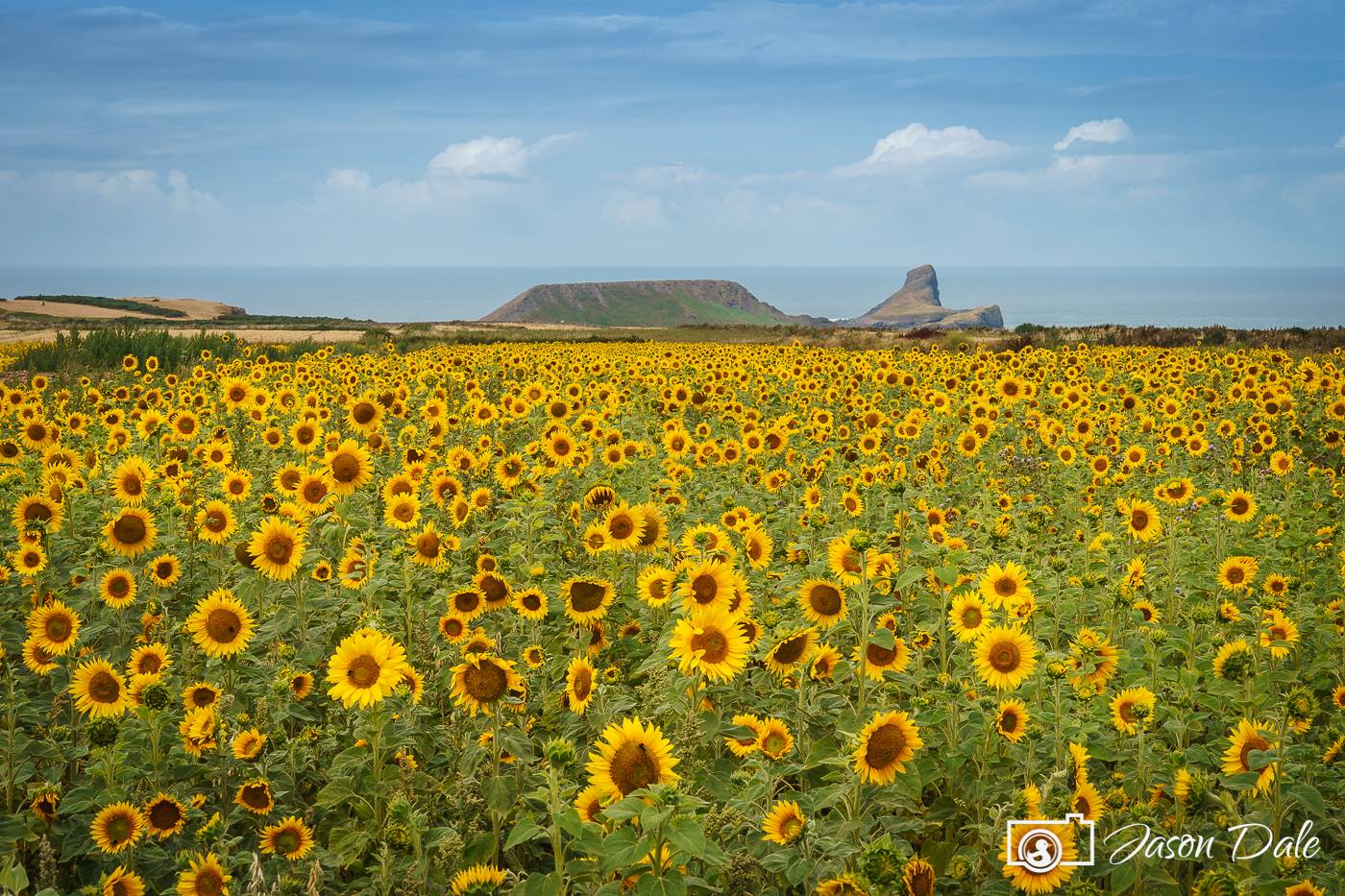 Last week a friend of mine told me that there were fields of sunflowers at Rhossili. She’d spotted them whilst out horse riding and let me know where to find them. I’ve seen a lot of fields of flowers pictures – mainly lavender – but hadn’t had the time to travel. So, as Rhossili isn’t too far, this was a photo opportunity not to be missed so we headed out early on Friday morning to beat the crowds.

The recent heatwave had given in to cloudy skies, but this hopefully would make for a more interesting picture. Finding the sunflowers was easier than expected. A quick walk through the overflow car park field, turn left through the gate and there they are! It’s no more than a 5 minute walk, but if you stuck the usual paths down to Worm’s Head you’d never know they were there. The National Trust have done an amazing job and in full bloom the sight is incredible.

I played around with a few ideas whilst photographing the flowers. The aim was to get the iconic Worm’s Head in the picture but I couldn’t decide whether it was better on the left or right. I also wanted to make sure I got the most amount of sunflowers in the shot. There are three lines of sunflowers so there are plenty of angles and optiosn to try.

The image was posted on social media – Twitter, Instagram and Facebook. The latter generated the most response mainly because it was posted in a Welsh Landscapes group. Interestingly a number of commentators didn’t believe that the image was real: “This is definitely not real, clever photoshopping”, “My wife’s paintings look more real than that”, and “Gosh is that real? We’ve never seen this when we’ve been up there”.

The photoshopping comment was quite complimentary to me – I’ve barely got to grips with Photoshop so to generate an image that’s thought to be “clever” was quite nice. The painting comment was the oddest one – apparently “the flowers don’t look natural”. The image has been tweaked in Lightroom but with minimal alterations. Nothing has been done to make the flowers look unnatural. They look the same in the original RAW file as they do above.

In fairness, if you didn’t know that sunflowers had been planted at Rhossili then you might think I’m pulling a fast one. A few posters had visited the area and not seen them or couldn’t work out the actual location. However, thankfully the National Trust Gower posted their own shots which meant people eventually realised the image was showing exactly what was there.

On the other hand, it’s a little bit sad that people now distrust photographs. Have we reached a stage where people are always looking for photoshopping? I’ve only recently moved to the Sony A9 and it’ll be interesting to see how other images I produce are perceived.

The sunflowers are expected to be in bloom at Rhossili until mid-August. How the recent storms have effected things I don’t know, but hopefully there’s still opportunities for other photographers. If not then they’ll be back again next year. Look out also for fields of poppies that will be available earlier in 2019.

This image is for sale. If you’d like a digital copy for use to create a personal print or canvas then get in touch.

Pelican on Lake Kerkini as the sun was rising.. #p

From the pelican archive - taken at Lake Kerkini..

From the pelican archive - taken at Lake Kerkini..

At Lake Kerkini with the pelicans a couple of year

Silhouette selfie from a few years back.. when it

A rainy afternoon experimenting with water and foo

Waving humpback in Alaska.. this one was quite clo

Eagle on flight (Alaska) - back sorting out images