In this month’s Digital SLR Photography magazine there was an article about photographing water droplets. The article gave some quite cool instructions about how to set up a drip kit with specialist equipment or opt for a simpler version involving a bag full of water.

As it’s getting colder and darker at nights I thought that this would be a cool thing to try. Without the expensive kit I thought about the bag of water option but decided there must be an alternative. Version 1 involved a drinking bottle, a metal cat water bowl, a bit of garden irrigation tube, garden irrigation dripper and a garden irrigation tap. In theory it should have worked well – and reality it would have been better had the tap element worked.

Although the aim was to get a droplet and splash it didn’t always work out as hoped or as the magazine article suggested. The good news is that I did manage to get a few shots (and plenty of rubbish ones).

The show below was an unexpected bonus. I like the splash effect. 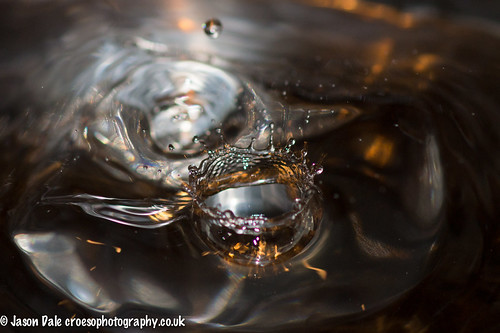 The aim though was to get a nice splash and a water droplet and the best result was with the shot below. By the time I’d taken this one I’d started dying the water in the bottle and cat bowl with food colouring. 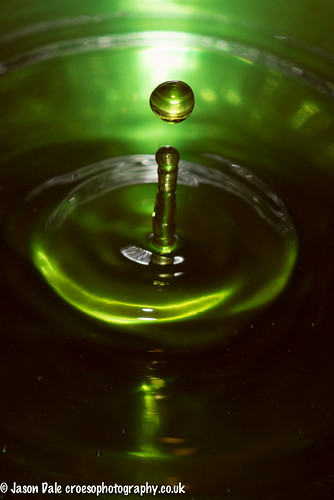 I’m quite pleased with the above! It was taken with a macro lens, flash and some rapid fire shooting.

However, my drip kit will need to be improved for the next experiment. The drip needs to be controlled and so it’s either switch to the bag & pin set up as described in the magazine, or find an irrigation tap that works!

Another change that is needed is that I need to put the bowl and camera on the same level. The above shots and others here were taken with the camera at 45 degrees above the splash.

If I can get my set up working then it will allow me to play more – for example using different colours and liquids. That should help the Winter nights fly by.