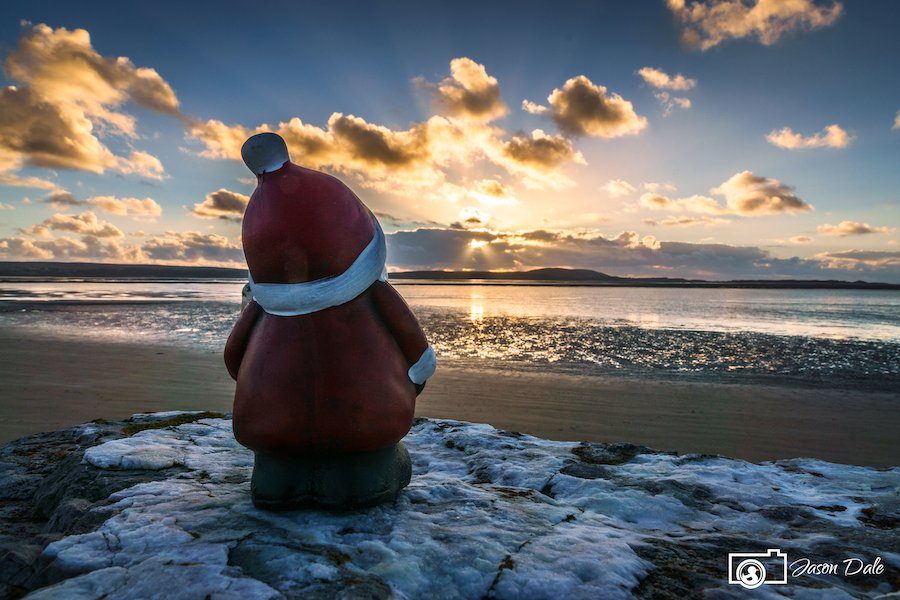 Over on Facebook there are a number of fun photography competition groups – one of which is called Cool Photo Of The Week. A theme is chosen by a previous week’s winner and members then submit their images on that theme. The standard is pretty high and there are some fabulous images posted.

During 2014 I came close with two images – one of a rusty ring and the other of Winston Cat The Third’s eyes. However right at the end of the year I got an image chosen as the ‘Cool Photo Of The Week’. The theme was Christmas and the winning shot was the one of Santa shown above.

This was from a series of festive shots that I took using an ornamental Santa. I just found some interesting places to pose it around the Machynys area just to see how things went. The shots were of particular note as it was the first time I’d been out with the camera having dislocated my right shoulder in November.

It was nice to be out and about again.

Anyway the winning shot shows Ornametal Santa looking at the sunset. The white rock that Santa is sat on looked icy/snowy and looked perfect for him to be and watch the sun going down. It’s a fun shot and it was great that it was chosen as a ‘Cool Photo’.

The “prize” was choosing the next category and I decided to go for “Frozen” to fit in with the cold weather. Another part of the “prize” was then picking a winner from the many amazing entries – a tough but enjoyable job!!